Many people will experience some form of gum disease during their lifetime. Gum disease – also called periodontal disease – is the result of an infection, which has spread to the gums and tooth roots.

Gingivitis is the early stage of gum disease. It is the infection of the gums from bacteria resulting from poor oral hygiene, causing inflammation, gum tenderness and bleeding when brushing and flossing.

When treated early by the Glebe Dental Group gingivitis can be reversed and prevented in the future by adopting a thorough oral hygiene routine and attending regular appointments with a Glebe Dental Hygienist every six months.

Periodontal disease is a condition and increases in its severity the longer it is left untreated. When gum disease has progressed from the gingivitis stage, it is then known as periodontitis.

The most common cause of gum disease is plaque, a clear sticky film over the teeth and gums. The bacteria in plaque attacks the gum tissue and tooth enamel, causing both gum disease and tooth decay.

Brushing twice a day (morning after breakfast and night before bed) and flossing will help prevent the build-up of plaque. 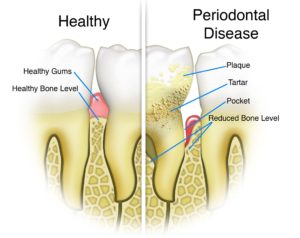 There are signs and symptoms that can indicate the development of gum disease and include:

If you experience any of these symptoms you should schedule a hygiene appointment with the Glebe Dental Group.